Instagram culture threatens to take away the challenge of poetry

What is art? What is poetry? It is always hard and dangerous to provide a definition of any topic. A new trend of poetry is on the rise on social media: simple poetry, usually made by people who haven’t studied literature and where the main topic is romantic love. A lot of big publishing houses in Spain have started compiling these social media posts into books catalogued as poetry, and they have had a huge reception.

However, later, Bourgeois society associated practical knowledge with lies and sin and theoretical knowledge became the only truth. A ramification of the latter was created for the people who were not highly educated or cultivated: kitsch culture, which was easy to understand.

When publishing houses release a book, such as Piel de letra (“Leather of letter” in Spanish) by Laura Escanes, a fashion Instagrammer, they promote kitsch culture. For example, the poem “Before you”, which says: “Before you, it’s me./ Because I love you/ but I love myself before” (translation is my own) says nothing at all. It has a façade of feminism, but its form is too simple. This makes people think that they consume genuine culture.

The predominance of feelings connects with our most basic instincts and neutralises critical thinking. It is not about making literature very complex and elitist, depriving it from emotions. Feelings are an intrinsic part of ourselves; it can be relieving to feel understood by reading someone else’s words that resonate with you. But it is necessary to promote reasoning and independence. Kitsch culture and simple poetry underestimate the ability of readers, as if they were not good enough to understand real culture.

When I was trying to get into Foucault’s work, I asked a university professor for advice about what introductory readings would help me through as preparation. “None. If you want to read Foucault, start reading Foucault”. It took me three hours to start understanding something of the first page, but the feeling of accomplishment I got after it was worth it and, with time, it got easier.

I truly believe that culture, not only literature but also plastic arts, cinema or even music in general can change mindsets and society. But we cannot tell people what to do or what to feel. Rather than a perspective from kitsch culture, we need to create a challenge, to provide space for culture to make an impact, to trigger critical thinking. It is this way that people will be able, step by step, to learn another way of reading.

Interview with a New Yorker cartoonist

Is Boris Johnson renewing or destroying the union? 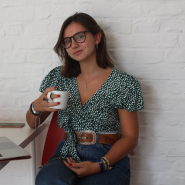 Laura Benedicto has a background in literature and philosophy from her studies at the University of Barcelona and is now willing to go into journalism. She is currently contributing to the Spanish and Latin American magazine Liberoamerica.com, writing books‘ reviews. She has worked as an event moderator for the Ateneu Barcelonès, the historical city hub for culture with 150 years of history. She has also presented book launches for publishing houses. She believes in the power of stories to make an impact on people’s mindset.

The politics of forgiveness

In death, XXXTentacion is being remembered as talented, not abusive

Why is ‘The Virgin Bride’ still on a pedestal?

A female Bond is not the answer

There remain a few respectable figures of authority in Hollywood