Dear the left, gays are not your pets

I am a young Scottish Conservative studying politics in Aberdeen. I like aviation, sci-fi and, like everyone else, I enjoy going to the pub. I also happen to be gay. There is more to me than my sexuality, and it isn’t key to informing my political views. It’s time the left learned this.

What does define my politics is my support for the free market, individual liberty and equality of opportunity. It is because of this that I am a Conservative. Yet, I have often been told that I am some sort of ‘self-hating gay’ because of this – looking at some of my ex’s I might do on those occasions. People, especially on the left, usually go on about how Tories are apparently homophobic or point to legislation implemented in the 80’s as a reason for why I shouldn’t be a Tory.

I wasn’t even alive in the 80’s and the Conservative party that exists today is not the same as the one that existed then. I recognise how I’m lucky to be in a country where I can be myself thanks to campaigners before me who opposed legislation like Section 28. I also recognise that the Conservatives have had a poor record historically on gay rights but so have many other parties. In 2013 MPs across parliament voted against same-sex marriage be them liberal democrat or Labour.

We must also note that even during the 80’s and 90’s that there were Conservative MPs that stood up for gay rights such as Edwina Currie, who tabled an amendment in the mid 90’s to reduce the legal age of consent for gay men to 16. One of her more triumphant achievements than her ill-fated TV show ‘Currie night’.

We must recognise that despite the past, what is important is what the party stands for today. It was under a Conservative Prime Minister that same-sex marriage was legalised. That same party also currently has the most LGBT MPs than any other party with 20 out 45 LGBT members hailing from the Conservatives. We must also not forget about the former leader of the Scottish Conservatives, Ruth Davidson. It was her, a 5ft former Territorial Army signaller that led the Scottish Party to its strongest results in Scotland for years. Oh, did I mention she’s married to a woman?

With David Cameron describing the introduction of same-sex marriage as one of his “proudest” achievements during his time in Number 10, Theresa May’s LGBT action plan and many prominent LGBT members it is clear that the party is firmly behind supporting gay rights.

If this is the case where does the stigma come from? That would be quite often from within the LGBT community itself. Many gay Tories will be able to tell you about several occasions where they’ve been ostracised by the community that is supposed to be inclusive for all and represent them. I myself received a torrent of abuse on one occasion on Grindr due to my political views. Similarly, I was accused of sending “my people” to the gallows for expressing my dislike for Hillary Clinton. With United States being the centre of gay culture with shows, like the crowning jewel of modern-day gay customs and traditions, Ru Paul’s Drag Race being produced there, I’m unsure about that one.

The left repeats this exclusionary behaviour across all minorities by using identity politics to marginalise certain groups and divide our society. Their constant use of labels to try and dictate what I or anyone else should do or think is ludicrous. Someone’s sexual orientation has no bearing on an individual’s voting intentions as evidenced in 2015, which saw that 26% of LGBT people voted Labour. The same amount as those that voted Conservative.

To echo Madonna, “It makes no difference if you’re black or white, If you’re a boy or a girl” or in this case gay or straight. You should support whatever party you want. Gay men and women didn’t get the equality that we enjoy today just to be told how to vote. So, with a gin in one hand and Cher softly playing in the background, I say that we are no pets of the left and we shouldn’t be treated as such.

The UK media is failing us in this pandemic

Support the British press during the uncertainty of covid-19 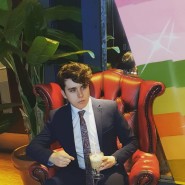 Braiden is a third year Politics and International Relations student at the University of Aberdeen. He is Vice-President of the Student Parliament and the Vice-Chairman of the University Conservative Association. Key interests include politics, aviation and free speech.

You can be racist towards white people

Productivity does not mean success

COVID-19, Most Recent, Protests, US Politics

Presidential debates and Supreme Court nominations: the US election so far